The first exercise today was the chin up. As in, no assistance – just your straight up, chin-over-bar exercise. From there, I was to do as many as possible and then do assisted chin ups once I failed. I haven’t tried to do a real chin up in a while because I know it’s not going to look pretty and it’s a bit of the ‘ignorance is bliss’ syndrome, but today I had to do it. It was written in the stars.

I did everything right.

I bypassed those amped up pop songs and let the hardcore rock songs stay silent. I went for the motivational speech. It’s one of those things that make you feel powerful when you listen and you really believe that whatever is holding you back doesn’t have a chance.

Today is your day.

This is your time.

Take a listen, it’s worth it: Mindshift Motivational Video (The video itself is fairly typically cheesy, but the audio is what gets me going.)

I started stretching with the words sliding over the air and setting up camp right in my very core. I even put on gloves for better grip. I paused before reaching for the bar, envisioning my muscles going through the motions. And then I started to lift.

As in I have maybe gained a centimeter or two, maybe even an inch of distance since the beginning of this challenge. I can’t blame the motivational speech – that was spot on. The chin up really is a mark of physical strength. There’s just no way to cheat it. When you’re doing cardio, you can run slower; when you lift weights, you can sacrifice form. With the chin up, you just do it or you don’t. There is no gray area, no sort of, no excuses.

So, needless to say, I went straight to the assisted chin up from there. I also had my second run-in with the devil’s trifecta: front raise, lateral raise, rear delt raise – no breaks. Individually, these exercises are A-OK, but one after another is a rough go, particularly with my weak left elbow. Now, I also had a sporting commitment in the evening so my workout was followed up with a grueling season opener broomball match. Grueling in that my team only had one sub… And this was my third sporting event of the week. So, If I were to add on to Tuesday’s soreness diagrams…. it would look something like this: 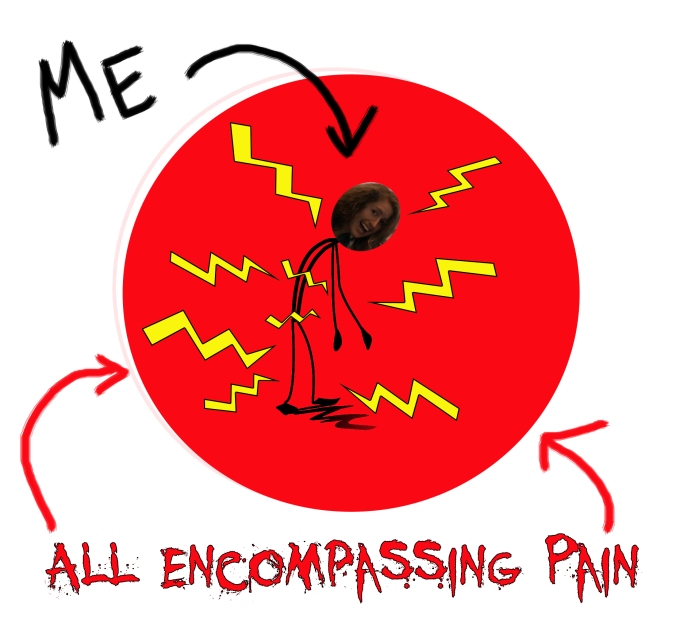