I’ve learned a few things over the past few mush meals and that has caused me to do the old switcheroo for the remaining two feasts. Initially this was supposed to be the grande finale of the challenge, but now it’s the penultimate meal.

While perusing mushroom-based dishes, I saw a picture for a ragu. Now, it’s already been established that I’m not proficient in the kitchen so it should come as no surprise that I had no idea what a ragu was. Based on the picture it just looked disgusting to me and earned top spot as my hypothesized worst meal. I didn’t look too much further into it than that. It looked gross and like it was maybe a soupy tapas type thing. It’s not.

I cooked it according to the recipe, but then had no idea how I was supposed to eat it so I turned on the internet and looked it up. Supposedly it’s some sort of sauce that goes on pasta. My cupboard’s are bare (I mean, really, I’m spending all my dough on mushrooms… I open the fridge door and it just smells like Toadstools den…) so I didn’t have pasta. Luckily I didn’t try to eat it like soup. That would have been bad. Instead, I whipped up some rice and did a little improvising.

Also important to note (a lesson I learned in the nick of time) is that marsala is wine. Not masala. Who knew one letter could make such a world of difference?

Now, where things get tricky is with the sheer variety of mushrooms that I loaded this second-to-last meal with. When it came down to the eating, it was some pretty shady business. One mouthful might be full of shiitake mushrooms, another might be chanterelle, and yet another might be shimeji.

[Side note: That last mushroom (the shimeji) really creeped me out. All the stems huddled together into one clump and it felt like there were a million tiny little mushroom cap heads poking out. I couldn’t even look at it – a strange, inexplicable fear that it was some Medusa-like reincarnation nagged at the corner of my mind and as I brought the knife below the mushroom caps, I almost felt that a single cut would cause the network of mushrooms to squeal or hiss like a hundred snake heads ready to attack.] 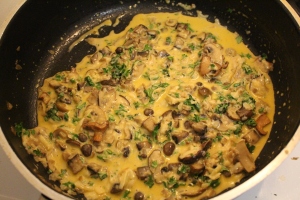 By putting so many different varieties together, it made it very clear that there really are some mushrooms that are better than others. But I’ll never know which ones. They were all diced up and looked the same to me so every fork-full was full of trepidation. Will I get lucky? Will it be a good one? An okay one? A bad one? Which ones are the bad ones? I can’t tell. What’s this? Is this even a mushroom? It must be. It has to be. Oh, wait, no. It’s just rice and parmesan. My hands start to sweat. I fidget, eyeing up the plate of mushrooms from the corner of my eye. This is ridiculous. The meal isn’t even bad. But you don’t know what you’re putting in your mouth! Oh hell, just pull the trigger already.

Mushroom roulette is not for me.

The meal was better than I had expected, although serving it with rice was really a saving grace. However, I will now forever be perplexed by which mushrooms are okay… because I distinctly remember one precise fork-fullwhere the mushroom that was in it was maybe the best mushroom ever. We all know that my saying that isn’t really an honour. Not when it comes from me.