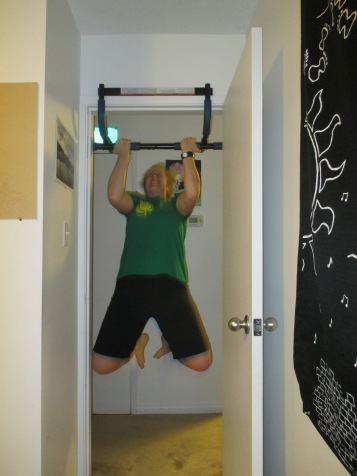 I have grown stronger, but I have not grown strong enough. I set out three months ago to do 10 chin-ups. Very quickly I realized this was a lofty goal and though I didn’t change it, I knew that if I could manage to do 1 chin-up, I would be happy with that even though it would still mean the failure of this challenge. This is the closest I have ever been to doing a chin-up, but I still did not do a single one.

Those who have followed along won’t be surprised by this. Some might be: you might have thought I was improbably going to pull this off; you might have rooted for me; you might have seen a fellow underdog make an attempt at something; you might have even seen yourself in me about that one thing you want but have been too scared to try and have. I set the bar high and I went for it.

This is the first challenge that I have failed and it’s important. It’s important because it’s easy to set goals that don’t push you or make you try harder than you have ever tried before. If you don’t fail – if you don’t fail ever – then you aren’t trying; you’re coasting. There may be nothing wrong with coasting, letting the status quo take you through your life, but if you want something more, if you want to be more, to accomplish more then you have to fail. Nobody likes this idea, but it’s true. If you keep coasting you will never know what you are capable of. There is greatness in you, but it’s up to you to find it. Whatever that may be.

No one likes to fail and I am certainly no different. I don’t like being told I am not good enough, but I can accept that at this moment in time about this particular challenge I am not good enough. Perhaps I never will be, but perhaps, one day I will. That is entirely up to me. When you fail, it’s life asking you if you have what it takes to try again. It’s asking you do you care enough to try again? Are you strong of heart? And if that answer is no, so be it. That’s where you settle. That’s where you begin to coast. The thing about coasting is that you will always, eventually, come to a stop. It’s easy to give up. It’s easy to say this is the way it is. It’s easy to point to any number of obstacles and say it’s too hard.

There are many reasons why – some are excuses, some are fact, and some are interpretations of commitment, dedication, and perseverance. But none of them matter. What matters is what comes next. When you go after something and you don’t get it, it’s not the end unless you let it be. You have to ask yourself, is this it? Do I quit? And I hope, whether it’s a trembling, uncertain whisper or a resounding NO, that you do not accept that it’s game over. Every time you fail and pick yourself up again, you are becoming someone who is more powerful than you were before. Don’t let disappointment or frustration make you forget that.

Tomorrow I may fail again.

But that won’t stop me from trying. 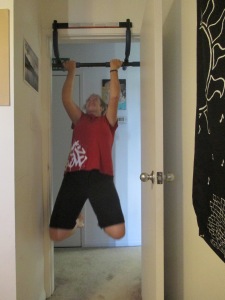 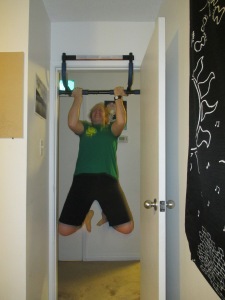 Tonight, I’m going to let these simple doodles sum up how my body is feeling with less than a month left in this challenge. And yes… I actually now have a document saved in my vault of stuff called butt hell fire. I feel, somehow, not quite as mature as I did a mere half hour ago. 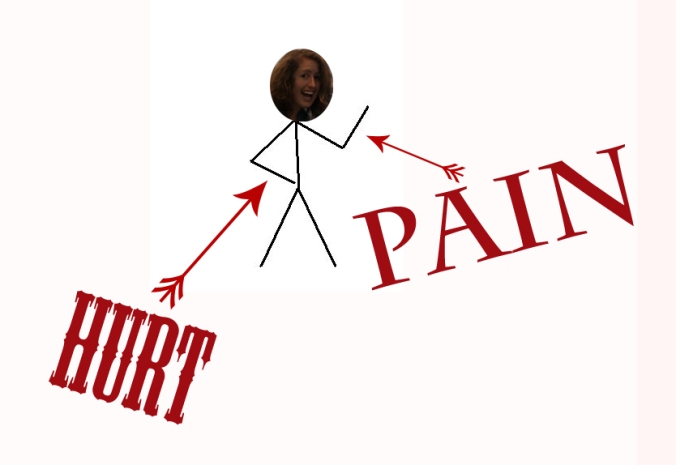 This is only the beginning… 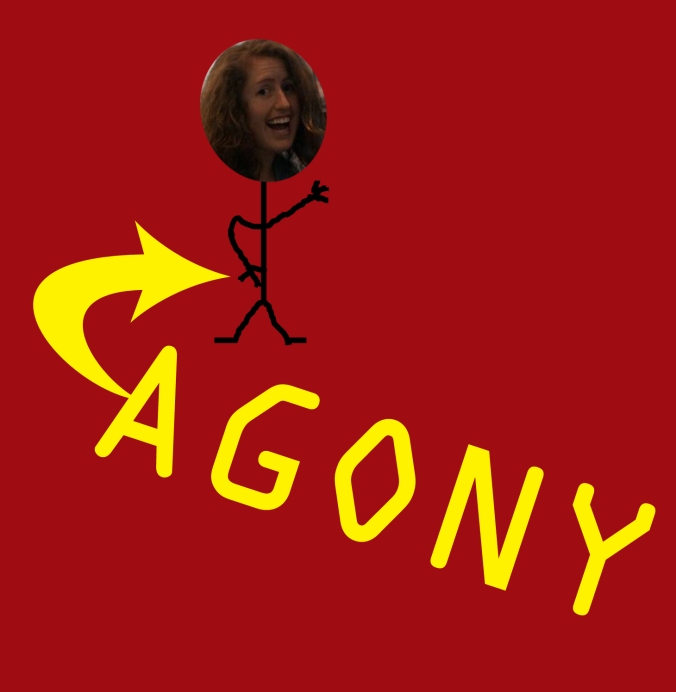 Don’t let my stick form worry you. The agony isn’t about some painful accident in which I seemed to have lost two fingers from each of my hands. It’s just a *mild* case of sciatica. 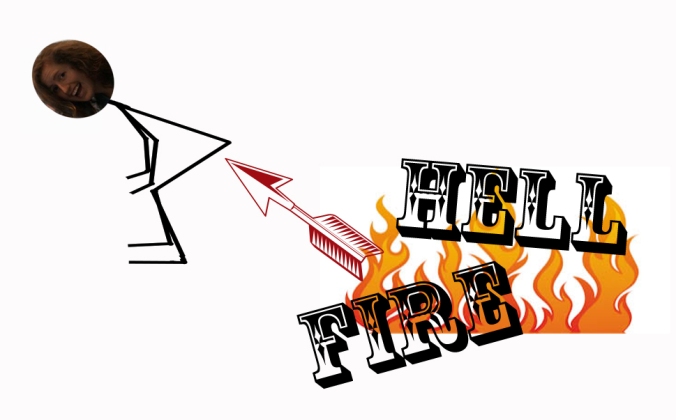 And this, well, this is clearly about gluteal muscles. I’ve been doing a lot of squats and reverse lunges lately.

Now, I think I am going to have  to call ‘er quits on this post and end on that note. Nothing else is going to top butt hell fire.

I tried today – I really tried – to do a single chin up. I put today’s workout on the back burner, eyed up the bar that is the bane of my existence, and tried my best to believe I could do it…

I did not succeed. Shocker, right? Though I was fresh off that defeat, I got down to business and began my workout in what feels more and more, with each passing day, like a futile attempt to succeed. However! There was some more undeniable (undeniable in that ‘Harper-needs-to-go’ sort of way) improvement with my assisted pull-ups, meaning I don’t have any doubt: I crushed my first set of assisted pull-ups today… and Harper really needs to be put out of office.

I actually accomplished a 4 count decent.

Now, I did, in fact, find out who said that less than 5% of people can do chin ups. And what’s more, she also says how many. Boomshakalaka! The great mysteries of this challenge have been revealed! Unfortunately, I don’t know where she got her stats from. So. There’s that to think about. Shawna Kaminski (C.P.T.) is responsible for this thought/idea/stat/pondering/reflection/fact/detail/truth/info: 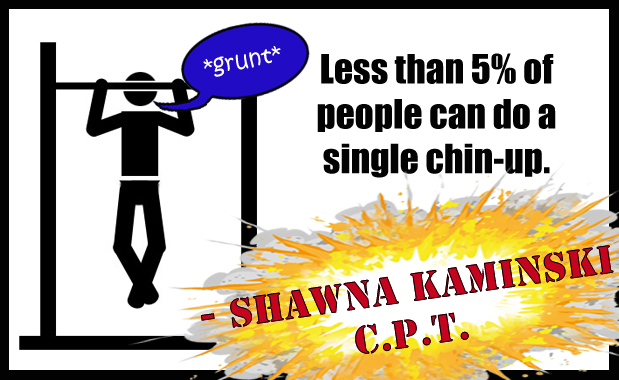 So there you have it. I had some serious questions from the last workout about this so-called fact… and those questions primarily still remain. For the most part. But the gleeful part of me is all hunched over, with my palms together and my right fingers tapping those of my left in a conspiring manner. Ah, yes. Just a single chin-up. Perhaps I’m not failing as hard as it appears. There is hope! Mwahahahahaha –

It’s morning. I’m feeling good. The bar hangs in the doorway and I eye it up like a nerd who finally grows a backbone, tosses his glasses aside and struts up to the beauty queen while showdown by the Electric Light Orchestra pumps over all other sound. He doesn’t just ask her out, but tells her You. Me. Saturday night.

Except that it’s me and the chin-up bar and we’re not going out. No. The impossible odds I’m trying to overcome are not those of a dork winning over the lady at the top of the social pecking order. I’m going to slowly lower myself to the full hanging position. Bad friggin’ ass, I know.

I grip hard. I raise my chest to just beneath the bar. I clench my biceps. Flex my shoulders. And take the step.

It’s no 4 second decent, but it is controlled. Oh, and did I mention I tied an extra 5 pound weight around me? Booyah! But, like the middle of any rise-of-the-dorks movie after the first 20 of these I was pretty much back to the slight-resistance plummet. Such a cruel tease… just like those damn prom queens. But, as you know, this movie ain’t even but a fifth of the way over. I’ll win her over in the end.

So. Those hanging leg raises. If I ever get to feeling like I’m accomplishing something, they’re always there to tell me I’m still nothing. Here is what the final position is supposed to look like, based on the workout I’m following: 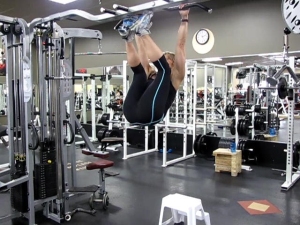 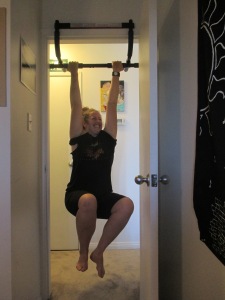 As you can see by my strain face, I clearly ripped a hole in my shirt from trying so hard. Clearly. And look at that form. Nice, tight and straight am I right? I’m not right. Now, in turning to the almighty internet, “hanging leg raise” returns a lot of results that look like this: 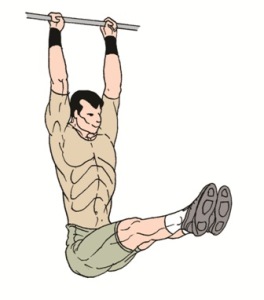 … and I’m still not even close.

I grab the handles and prepare to step off the chair to do an assisted pull-up. I take a deep breath and silently encourage my arms. I take the step. And holy hallelujah! I actually don’t plummet straight to the ground. There is resistance! Sweet, glorious, tiny-little-bit of resistance more formally known as… controlled descent.

Out of the 40 attempts, a solid 10 of them felt like I could categorize them as controlled. Well, it might be more accurate to say semi-controlled because it was still a quick trip down. That’s some lowlife underdog maybe-a-come-from-behind-victory-just-might-maybe-possibly-could-happen-maybe action right there. I mean that’s only 25%… not quite a passing grade but this isn’t a school kid’s paper going through some red inked grading.

Right now, any progress deserves a small celebration. You see, each work out is this straight up battle where I’m the leader of the battalion yelling at the soldiers not to give up: you’re better than this! You can do it! Do not give up! Why are you trembling?! You pathetic son of a …..

I have some weak soldiers signed up for duty so when they get a little stronger, do a little better I get pretty pumped about it.

Now, the great thing about today was I finally got some tunage going on as well. Everybody has their work out or pump up jams and so far that has been missing from my routine. We all label them corny-like, you know, with names like Gym Rat Jams or Rocky Balboa or Gettin’ Buff or Party Time. I call mine Adrenaline so I fit right in. It starts perfectly with intro by xx then explodes into a mishmash of pop, rock, rap and even a country song. Whatever gets ya goin’.

So if you’re looking for some workout tunes, here’s what I got in my line-up so far: 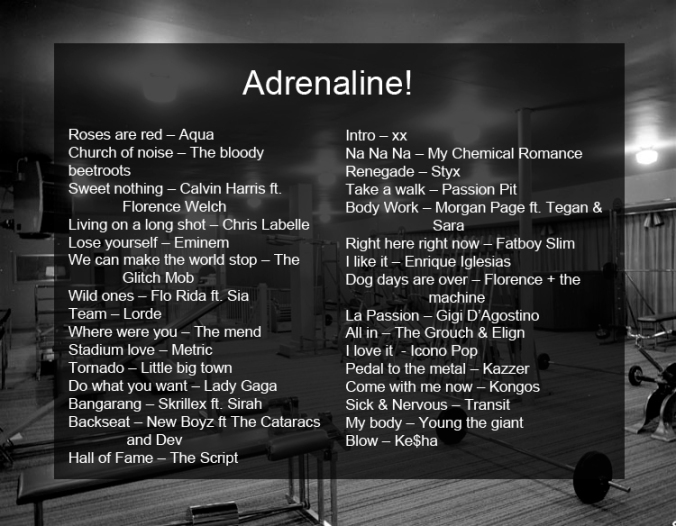 Take my advice. Out of all the music and songs and sounds out there, obtain intro by xx. It’s a short instrumental , but no matter where I am or what I’m doing that song digs right into my bones and makes me want to save the world, cure cancer, blow out raging forest fires with a single breath…. I’m sure you get it. It starts slow, but deep and you can feel your back straighten and your head lift and there’s power running through your entire body and then it hits when the voices come over the speakers and you actually start to believe you can do anything.

But then again, everyone experiences their music different. It gives me chills, but it might just piss you off. Either way, there’s motivation in there.